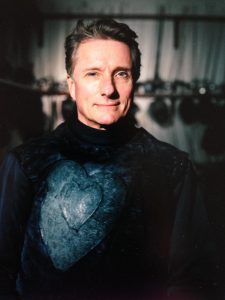 We are deeply saddened to confirm the death of our Head Coach and Chairman on Friday 26 April. Steve passed away following a head injury sustained in a fall, whilst on holiday in Spain with family and friends over the Easter break. Although he was flown home by air ambulance, he never regained consciousness and died at Pembury hospital a week after the accident.

As the heart of the club he helped found in 2005, Steve will be hugely missed by us all. Our deepest sympathy goes to his wife Karen, his daughters Yasmin and Bella, and his family and friends across the world and throughout the fencing community. His instincts as a fighter, his fitness and his matter-of-fact approach to his diagnosis of motor neurone disease in 2015 meant that he lived life to the full right until the end, and there is a small measure of comfort that he did not live to suffer the worst ravages of that terrible disease.

Steve’s unique blend of outstanding success as a fencer, coaching excellence and showbiz glamour, as well as his ability to inspire, improve and bring the best out of all his pupils - of whatever level - here in Tunbridge Wells and elsewhere, will never be forgotten by those of us lucky enough to have known him.

A three-time Olympian, three-time British Epee Champion, three time Australian Epee Champion, qualified in Paris as a Maitre D’Armes, Steve was equally able to teach the basics of fencing in a fun and accessible way to a class of complete novices as he was to identify with pinpoint accuracy the weaknesses in elite performers, and challenge them all to be better than they thought they could be.

Having been born into the fencing ‘royalty’ of the Paul dynasty, Steve nevertheless worked out early in his fencing career that there was no substitute for intense training and a professional approach to fitness, in what was essentially an amateur era. It was fitting that perhaps his most famous victory came at the glamorous Martini ‘A’ Grade in 1981. Other milestones, such as being the last British fencer to compete at more than one weapon at an Olympic Games (when he was part of both the foil and epee teams in Moscow in 1980) and returning to the GB scene from Australia to take his third and final National title in 1993 at the age of 38 (having first won it in 1980) all help to explain the reverence with which he is held within the epee community here and abroad. His part in the Bond film ‘Die Another Day’ and his work with Orlando bloom for ‘Pirates of the Caribbean’ only served to enhance the aura.

Living in Eastbourne meant that when his friends Jerry and Lucy Raj approached him with a plea to help them set up and run a new fencing club in their children’s school in Tunbridge Wells, he was happy to help. Very soon word got out amongst the local community that a world-class exponent was teaching all comers in a small local club, and largely through the force of his personality RTWFC quickly established itself as a centre of excellence for epee fencing.

The club moved to the Army Reserve Centre on St John’s Road in 2011, and began to attract more and more members. In order to accommodate these extra fencers, the club added a Sunday morning session alongside its two weekday sessions, and employed an assistant coach alongside a number of volunteers.

Steve’s winning combination of world-class coaching and effortless pizzazz soon began to have an impact, and RTWFC began to challenge for medals at county, regional and national competitions. In particular, two fencers stood out: Piero Steiner and James Russell. Piero, who trained with Steve at RTWFC from the age of 6, began to win age-group medals at elite and national level on a regular basis; and James, who joined from Worthing Fencing Club, flourished under the Prof’s tutelage and won gold at national level in his age group as well as senior opens such as Bexley.

Despite being diagnosed with motor neurone disease, Steve continued to offer individual lessons to Piero, James, Amelia Dudley and several other promising pupils, adapting his coaching style to cope with the diminishing sensation in his fingers, hands and arms.

Realising that the more the disease took hold the less he could coach and the less likely the club was to hang on to its most ambitious fencers, Steve refocused RTWFC on attracting and inspiring younger fencers. As the club continued to grow, Steve brought in new coaches, and mentored them with a combination of graciousness and exactitude in every aspect of group and individual fencing lessons.

During the last year of his life, Prof still found the strength to run the Sunday training session, and was rightly idolised by the 30 or so youngsters in regular attendance for his unfailingly positive attitude, Olympic exploits and undimmed star-power.

To quote the great man’s own words from the 2012 book Epee Fencing: “Love your fencing. Enjoy your life. Happiness gives you resilience, and self confidence is a major asset…Positive thinking is required at all times.”

Prof, we will miss you.

Please note that there will be a small private funeral for family and close friends only, in accordance with Steve’s wishes. RTWFC will be organising an appropriate memorial event later this year but in the meantime for anybody that wishes to contribute there is a ‘justgiving’ crowdfunding page to enable to Steve’s family to cover the emergency medical costs incurred in bringing Steve home that can be accessed via: https://www.justgiving.com/crowdfunding/stevenpaul