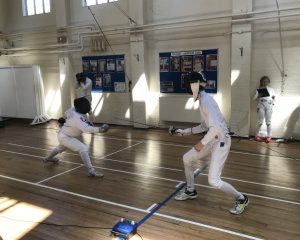 In the Senior Mixed event, experienced tactical smarts were met with youthful fire, and whilst the former had its moments the latter won the day. Having starved Piero Steiner of his favourite diet – his opponent’s blade – in an eyebrow-raising semi-final win 15-12, Paul Baillache fenced Daniel Powers in the final. However, following his dispatch of ‘Deadly’ Amelia Dudley in the last 4 by a scoreline of 15-6, Daniel was even less charitable in the final – winning 15-5 against a bemused Mr Baillache.

In the Senior Female category, Lindsey Briggs eased past Maria Machado 15-5, only to be strafed by Amelia 15-6 in the final – youth, in this case, also holding all the cards of experience too.

Georgy Faires pulled off a resurrection via repechage in the Cadet category, having lost his quarter-final to the cooler head of Jacob Earl 14-15. After the dust had settled, Georgy picked himself up and went on to beat Matthew Gathern in the first repechage, then got handed a bye in the second round due to his opponent’s withdrawal. In the semi, Georgy scraped past William Briggs 15-13, then met fellow repechage survivor Benedict Graham in the final – who had edged out Jacob 11-10 on priority to slip through the semis. Although Georgy took the title 15-10, special mention should go to Benedict – who should have competed in the Under 14s but rose to the challenge of fencing older boys with his trusty size 2 epee – bravo Benedict!

In the Under 14 age-group, ‘Lethal’ Lloyd Osborne lived up to his nom de guerre, shading Sergey Khlemanov 6-4 in a cagey final. En route to the top step of the podium, Lloyd defeated Max Withers 10-5 in the last 4, while Sergey – having only just returned from a long injury layoff – kept Eilidh Paterson at arm’s length for a 10-7 victory. Miles Raymond and birthday boy Laurie Briggs finished fifth and sixth respectively.

Besides the ‘bling’ on offer in the four categories, fencers were also battling it out to get their hands on ‘The Professor Steven Paul Shield’ for outstanding performance on the day. Benedict came mighty close, compiling a ledger of six wins and three loses against older opponents with longer swords, but was pipped by Senior champ Daniel Powers. Having lost only once in the poules – finishing with a indicator of +15 – and outscoring his three DE opponents by a total of 31 points, Daniel was ultimately a worthy winner. All hail ‘Danny Longshanks’!

Huge thanks to Chris Higginson for piste preparation and refereeing, to Josh Pink, Rob Parsons, Roberto Steiner, and James Fleming-Fido for refereeing, to Martin Briggs for photography, and to Don Coe for armoury, refereeing and for setting up videos of ‘Prof’ in the bar afterwards. Don’s efforts (ably assisted by web wizard Jacob) meant that we could all admire Prof’s nonpareil fencing and coaching skills – a truly fitting spectacle following a toast by club members past and present to our irreplaceable head coach.