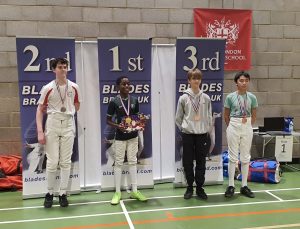 Strong performances by RTWFC’s fencers at the Elite Epee Junior Series were capped by bronze medals for Lloyd Osborne and Isabella D’Abbraccio.

All five of the club’s representatives performed admirably at the competition in Surrey on Saturday 23rd October, but it was our Under-14 fencers who shone the brightest.

Lloyd Osborne amassed five victories in the poules to be ranked fifth out of 21 going into the knockout rounds. A bye was followed by two dominant wins – 15-2 and 11-4 respectively – before Lloyd went down fighting in the semi-finals against eventual winner Oghenegaren Thompson. Despite a late rally via sharp beat fleches, Lloyd couldn’t quite neutralise the attacks of his speedy left-handed opponent and went down to a score of 15-10.

In her first Under-14 competition, 11-year-old Isabella D’Abbraccio took three wins from four in the qualifying round to progress as fourth seed. A bye was followed by a nail-biting 15-14 victory over fifth seed Emily Brunellesi, then Isabella lost a similarly nerve-shredding bout 15-14 against semi-final opponent Agnes Palmer – the latter’s parry-ripostes just enough to quell Izzy’s fire-power.

A busy week of stage performances caught up with Eilidh Paterson at the quarter final stage of the Under-14 event. Having fenced brilliantly to win all five of her poule bouts and progress to direct elimination as top seed, Eilidh ran out of steam in her quarter-final, losing to Palmer 15-13 and finishing fifth overall – a very creditable result given her hectic schedule.

The club’s two representatives in the boys Under-17 event ended up colliding in the last 16.

The fast-improving Miles Raymond qualified tenth out of 30, then kept his composure to sneak a 14-13 win against Jack Brandon in the round of 32. In contrast, team-mate Benedict Graham misfired in the poules and ended up 26th, then fenced brilliantly to dismantle seventh seed John Prineas 15-8 and blast through to the last 16.

A tense first period of ‘friendly fire’ saw Miles and Benedict locked at 8-all, before the latter’s greater arsenal saw him pull away for a 15-10 win. In the quarters, Benedict couldn’t quite solve the southpaw puzzle of William Paice and slipped to a 15-7 defeat – but he may well have learned enough to secure the win next time. Ultimately, Benedict placed 8th – just one win away from a medal – and Miles finished 12th, and both should be proud of their efforts.

Overall, all five RTWFC fencers finished in the top half of their respective events, showing great potential in a competition that is a step up from regional level and just a rung below British-ranking events in terms of difficulty.