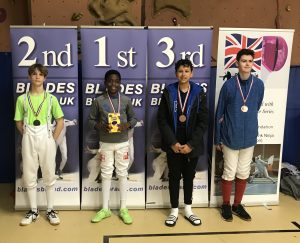 A fantastic five fencers represented the club at the Elite Epee Junior Series in Moulton on Saturday 19th February, and two headed back down the M1 with medals.

Lloyd Osborne fenced brilliantly to reach the U14 Boys final, only to be squeezed out 15-14 in a dramatic bout against Garan Thompson.

In the U17 Boys event, Benedict Graham looked sharp throughout, just coming up short 15-10 against strong-armed Cai Eastwood at the semi-final stage. Team-mate Miles Raymond finished a solid 18th in the same event – onwards and upwards, Miles…

Isabella D’Abbraccio and Eilidh Paterson acquitted themselves well in an U14 Girls comp that featured almost all of the country’s best fencers in the age group,. Frustratingly, Izzy and Eilidh collided in the last 16, with the former outreaching the latter 15-10. Still, 8th and 9th respectively against a tough crowd – most of whom are a year older – bodes well for future success.