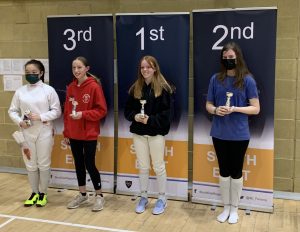 RTWFC had 15 fencers battling it out for British Youth Championship qualifcation at the SE Regionals in Burgess Hill on Saturday 5th February… and 11 made it through! Four medals – including two golds – were just the dazzling tip of an iceberg made of pure team spirit. Take a bow, one and all.