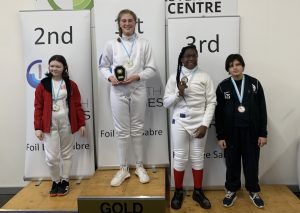 Fighting back from the brink of defeat, Izzy D’Abbraccio proved her knockout stage steeliness once again to win the U14 girls event at The Youth Series in Manchester on Sunday 20th March.

Placed fourth after the poules, Izzy found herself 7-13 down against fifth seed Erika Hodkinson in the quarters, only to rally to 11-14… then 15-14. Zoinks! A 9-8 victory against Zina Suresh followed, then Izzy took the final 11-7 against number two seed Kia Wright – who’d beaten Izzy twice in the poules!

Mental toughness? Tick. The win may just take Izzy to the top of England’s U14 rankings.

On Saturday 19th March a fantastic four of RTW teens were in action at their first ever open event – the Invicta in Canterbury. Matthew Gathern was unfortunately injured in the warm-up but soldiered on to 77th place; solid starts saw Will Patten and Benedict Graham both get a bye through to the round of 64, and they finished 45th and 46th respectively – great effort, boys! We await a final placing for Hannah Taylor in the women’s event.

Well done to all of our fencers in action this weekend.