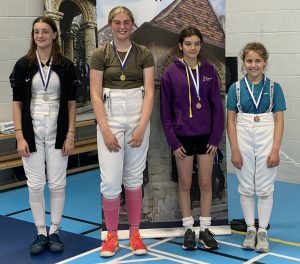 A big weekend of competition resulted in three medals for the girls and a solid haul of GBR Cadet ranking points for the boys.

At the Leon Paul Junior Series in Canterbury on 26th June 2022, Izzy D’Abbraccio struck gold in the under 13 girl’s event, beating English Youth Champ Lea Panyandee-Cappelli 10-9 in the final. Izzy then went up a gear in the afternoon, storming to gold in the under 15 event with a 15-10 win over Emma Mitzova.

Team-mate Andrea Ross took a fanastic bronze in the same event in only her second-ever external competition (and after starting fencing just one year ago).

RTWFC’s competition debutants Elsa Bronbjerg and James Dunmall also fenced at the LPJS and did well to win two bouts each. Unfortunately, in the quarter-finals Elsa lost to team-mate Izzy and James got squeezed out 10-8 by eventual silver-medallist Damian Tovar; they finished 6th and 7th respectively.

Meanwhile, at the Cadet BRC in London, the considerably more experienced trio of Miles Raymond (22nd), Benedict Graham (23rd) and Lloyd Osborne (27th) all put in points-scoring performances in pursuit of a top 20 British ranking in the Cadet (under 17) category. Their exploits keep Lloyd in 14th, Benedict moves up to 23rd and Miles to 46th.

In the girls’ event the day before, Hannah Taylor and Andrea Ross both scored some great hits in finishing in 28th and 31st position and now sit in joint 67th in the national rankings, ready to deploy the invaluable experience they’ve gained next time round.